This is a super fun card game that can be used to reinforce Spanish letter recognition. Great for intervention groups or centers. 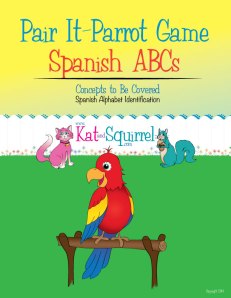 Goals of the lesson

Recognize and name all upper- and lowercase letters of the Spanish alphabet.

This version of the game includes the Spanish Alphabet. It also includes the original Kat and Squirrel (and Parrot) story. And the bonus Soup ABC order worksheet. Cut out the soup cans and glue them in ABC order in Squirrel’s cupboard. ABCs pronunciation sheet.

Check out our awesome pins!